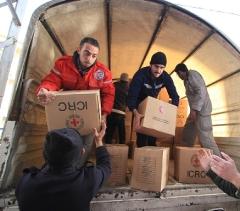 "We call for the immediate and unconditional release of the seven colleagues abducted this morning," says Magne Barth, head of the ICRC’s delegation in Syria. "Both the ICRC and the SARC work tirelessly to provide impartial humanitarian assistance for those most in need across Syria on both sides of the front lines, and incidents such as these potentially undermine our capacity to assist those who need us most."

The team had travelled to Idlib on 10 October to assess the medical situation in several Idlib Governorate health structures and to deliver medical supplies to Sarmin and Idlib city. The convoy, which was on its way back to Damascus, was clearly marked with the ICRC emblem, which is not a religious symbol.

“The ICRC is committed to assisting the Syrian people and will continue conducting its humanitarian activities both in the country and in neighbouring countries for refugees there”, added Mr Barth.