The report, The Responsibility to Prevent and Respond to Sexual and Gender-Based Violence in Disasters and Crises, shows a rise in risks including sexual harassment, child marriage, child sexual abuse, domestic violence and trafficking in Indonesia, Laos and the Philippines.

The report draws on household surveys and focus group discussions involving 1,800 people affected by disasters in Indonesia, Lao PDR and the Philippines.

Community members in all countries were distressed by the rise in domestic violence and child marriage following disasters. One third of respondents in the Philippines said that women and girls felt distressed by the rise in child marriage after disaster. People were also worried about trafficking, over-crowding in shelters and the lack of support for lesbian women, gay men, transgender, intersex and queer people after disasters.

In Indonesia, only 3 per cent of people had adequate legal information for problems including domestic violence, sexual harassment in temporary housing and a lack of inclusion for people with disabilities. In Laos, 43 per cent of respondents had heard of someone needing medical care for domestic violence injuries after disaster. Twenty-seven per cent were aware of someone who had been raped following a disaster.

IFRC Sexual and Gender-Based Violence Adviser and the report’s lead author Dr Priyanka Bhalla said, “Sadly, all the communities we spoke to told us they faced increased sexual and gender-based violence after disasters. Those most at risk were adolescent girls, followed by adolescent boys and older women. The effects were often life threatening and affected survivors’ daily life, dignity, rights, livelihoods and health.”

Although one in three women faces physical or sexual violence during her lifetime, after disasters the risk goes up because of a breakdown in essential services, increased poverty, poor emergency shelter design and inadequate coordination by disaster responders.

The report calls on governments, aid agencies and communities to protect people by ensuring that evacuation centres have separate spaces for women and men, separate and lockable toilets, and adequate lighting. Disaster responders should improve coordination and collaboration. They should partner with local agencies that specialize in treating and supporting survivors of sexual violence. In the longer term, all disaster responders should address the root causes of sexual and gender-based violence, which are gender inequality and abuse of power.

Globally, the Red Cross, including Irish Red Cross will implement the recommendations to protect people affected by disaster by building the capacity of our staff and volunteers to prevent and respond to sexual and gender-based violence in emergencies worldwide. 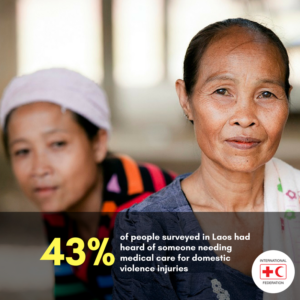 Your gift will save lives