Elderly and sick the focus of special care 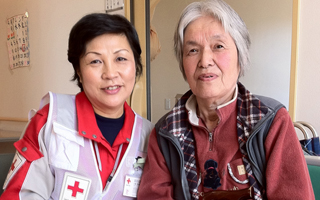 Out of the corner of my eye, almost as if in slow motion, I see an elderly woman falling off her chair. She’s right over the other side of the room, so I feel powerless to intervene. But I needn’t worry, because several Japanese Red Cross nurses rush forward to catch her.  This elderly survivors’ dormitory is in one of the classrooms at Rikuzentakata Junior High School.

I can see the kids’ academic performance tables are still on the walls – except they stop after March, when the earthquake and Tsunami struck at the heart of this part of northeastern Honshu island.

The elderly people who have replaced the kids – at least for the moment – are the most vulnerable among the population of this part of Japan and of these evacuation centres.

At least some of them are making steady progress in overcoming the impact which the disaster had on their fragile health.

The 79-year-old Hitoshi Kanno is still in a wheelchair. But nursing staff say that even that is an improvement on his immediate situation following the Tsunami, when he was bedridden. He was able to walk around with reasonable mobility before the disaster struck.  It’s not quite clear what happened next. But he completely lost his mobility and is only slowly being helped back on his feet again.

I can see this situation, with rows of beds in the middle of a classroom, isn’t exactly easy for elderly people who have been accustomed to living in their own homes.

The JRCS nurses are concerned about one woman in her eighties, whose bed is just by the far window – not the one who fell off her chair. “She’s a little dehydrated, as she doesn’t want to drink too much because then she would have to be helped to the toilet during the night.”


Finding themselves in this situation isn’t easy for anyone, especially for the old people. Mitsuko Numakura, who’s over 80, and her daughter had only recently come from another part of Japan and bought a house here in what was a tranquil area, “We didn’t buy insurance against Tsunami, only fire coverage,” explains her daughter, who is herself 62.

Fortunately they have received a cash grant of money which was donated through the Japanese Red Cross Society (JRCS) and distributed by a municipal office to help them cope with their immediate needs. But the future is still a bit of an unknown quantity for them.

Inevitably, many of the elderly people will have to move to special care homes in order to be looked after properly. And with this in mind, the JRCS plans to use some of the funds donated from abroad to provide special beds for the homes to make them as comfortable as possible.

But while they are still in this makeshift evacuation centre, medically, as well as being cared for by the nurses, the elderly survivors and the more mixed group of people who are sheltering for the moment in the school’s gymnasium are also being looked after by a team of JRCS doctors. They’ve had a two-day long journey down from the northern island of Hokkaido.
They tell us that the psychological impact of the disaster has clearly had an effect on people’s state of health. “People’s chronic health problems, such as hypertension or diabetes have been aggravated by the psychological shock of what they have been through,” says a young doctor, Issei Yuki.

As a post-script, I hear that the medical assistance role at this evacuation centre has now been handed over to local clinics, with the Mayor of Rikuzentakata, Futoshi Toba, saying “we are thankful to the Japanese Red Cross who was the first team to come and supported us for a long period. This handover is one of the signs of recovery.”